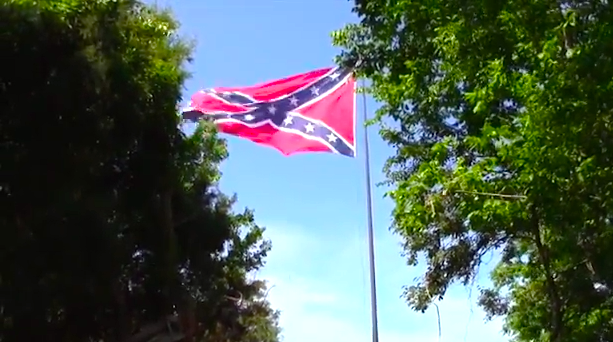 The thing about the confederate flag is that it is a secessionist battle flag. Without a doubt, the flag represents warfare, and at worst adherence to principles of racial supremacy. There are an infinite number of ways to celebrate history and heritage without the free and public flying of this flag. -SJ

Motorists traveling a major Virginia highway now have a second supersized Confederate flag to catch their attention, even though the first banner drew protests and debate.

The Virginia Flaggers, a group that celebrates the heritage of the Confederacy, raised the 20-by-30-foot battle flag on Saturday alongside Interstate 95 near Fredericksburg, some 60 miles 96.6 kilometers north of the state’s capital of Richmond.

The group raised its first flag last year along the highway, immediately drawing complaints that it promoted racism and slavery, and leading 24,000 people to sign an online petition against its display.