Kim Gordon on the Pain of Performing With Her Ex 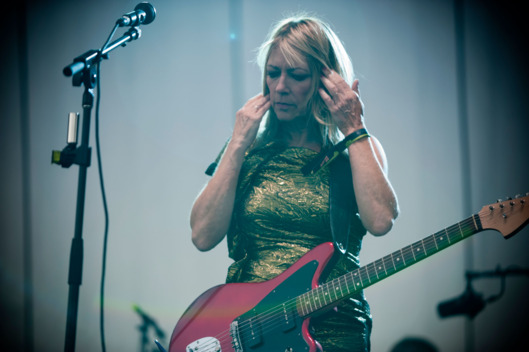 For whatever reasons — sympathy, or sadness, or the headlines and articles about Thurston’s and my breakup that followed us wherever we went that week — we had the passionate support of South American audiences. Tonight’s crowd stretched out in front of us and blurred with the dark clouds around the stadium — thousands of rain-soaked kids, wet hair, naked backs, tank tops, raised hands holding cell phones and girls on dark boys’ shoulders.

The bad weather had followed us through South America, from Lima to Uruguay to Chile and now to São Paulo — a corny movie-mirror of the strangeness between Thurston and me. The festival stages were like musical versions of awkward domestic tableaux — a living room, or a kitchen, or a dining room, where the husband and the wife pass each other in the morning and make themselves separate cups of coffee with neither one acknowledging the other, or any kind of shared history, in the room.

“Hello!” Thurston called out genially to the crowd just before the band launched into “Death Valley ’69.” Two nights earlier in Uruguay, Thurston and I had to duet together on another early song, “Cotton Crown.” Its lyrics were about love, and mystery, and chemistry, and dreaming, and staying together. It was basically an ode to New York City. I had been too upset to sing it, and Thurston had to finish by himself.