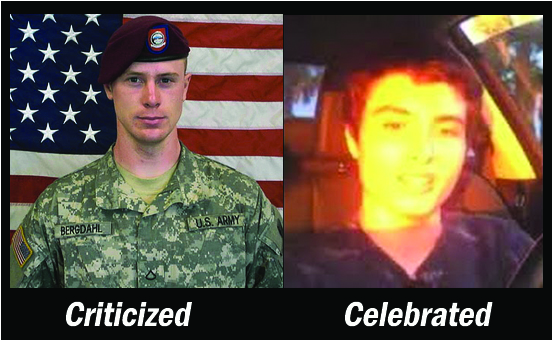 How is it that a serviceman we know nothing about (Bergdahl) is being denigrated and questioned while someone we know a bit about and wish we didn’t (Roger) has his videos and words celebrated throughout all channels of the media. If it bleeds it leads? There’s something wrong when a society comes to a point where it upholds the opposite of it’s principles. 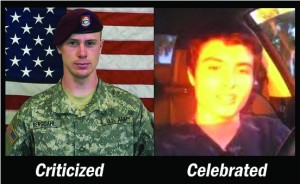 Sneak-thieves like Manning and Assange are celebrated for stealing and exposing the secrets of others, while never a second thought is given to their collateral damage. Even that arrogant ass Snowden is held by many to be a hero – a more crass devaluing of the word I have never heard. And before you get up a head of steam and want to tell me about Snowden, be prepared to explain why you need 1.7 million documents to expose a problem. Or why reporters need 200,000 documents to support your assertion. You don’t. They don’t.

Yes, Bergdahl may be a deserter, or even a Taliban sympathizer. Not the greatest decision in my view, but he took action based on principle, and as far as we know did nothing to harm a single person. According to our country’s principles, he is innocent until proven guilty. What we do know is that he signed up to serve his country. I think that deserves the benefit of the doubt. At least until he makes it home!

Captured by the Taliban a year into his tour, Bergdahl was held for five years until Saturday’s dramatic announcement that he’d been swapped for five of Guantanamo Bay’s most dangerous prisoners.

“All of America is watching your little town and hoping the right thing is done.”- Email sent to town of Hailey, Idaho

But the jubilation that followed his release has given way to confusion and fear, as questions about whether Bergdahl was a deserter have surfaced. City Hall has been inundated with angry letters and emails from around the country. The long-planned “Welcome Back, Bowe” celebration, planned for June 28 in Hop Porter Park, was canceled Wednesday amid growing claims by Bergdahl’s fellow soldiers that he deserves no honor.

“This man deserves no welcome,” reads one of the many emails City Administrator Heather Dawson has fielded at City Hall. “His reward is being alive, unlike the brave soldiers who actually followed their orders and continued to search for him knowing full well he had deserted his post.”